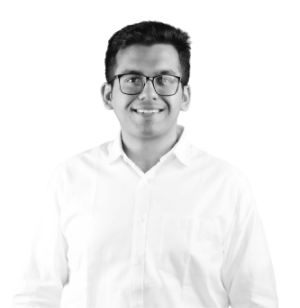 Never invest in any idea you can't illustrate with a crayon. – Peter Lynch

Vinesh joined Kalaari in 2021 and is a Venture Capital Fellow in the Investment Team. He loves speaking to entrepreneurs who are building ventures with a specific focus on FinTech and SaaS.

He is very keen on investing in entrepreneurs that are building products for the ~450M Gen-Z and Millennials in India. He believes that the wave of digitization in India will be led by the startups that will eventually become the Facebook and Apple of the world, and is very optimistic about partnering with such founders early in their journey.

Prior to this, Vinesh spent a year at TresVista in Mumbai and London where he was an Investment Banking Analyst in the Natural Resources team. He started his career at PricewaterhouseCoopers (PwC) in Mumbai where he had a brief stint in the Technology Consulting practice. He also co-founded a sports development start-up at the age of 19, which helped him understand the ground realities of running a bootstrapped venture.

Outside of work, you would often find him involved in philanthropist initiatives and discussing what could be the next $1B opportunity.

No matter your goals, Atomic Habits offers a proven framework for improving–every day.

Rework shows you a better, faster, easier way to succeed in business. Read it and you’ll know why plans are actually harmful…

Why We Invested in Tring