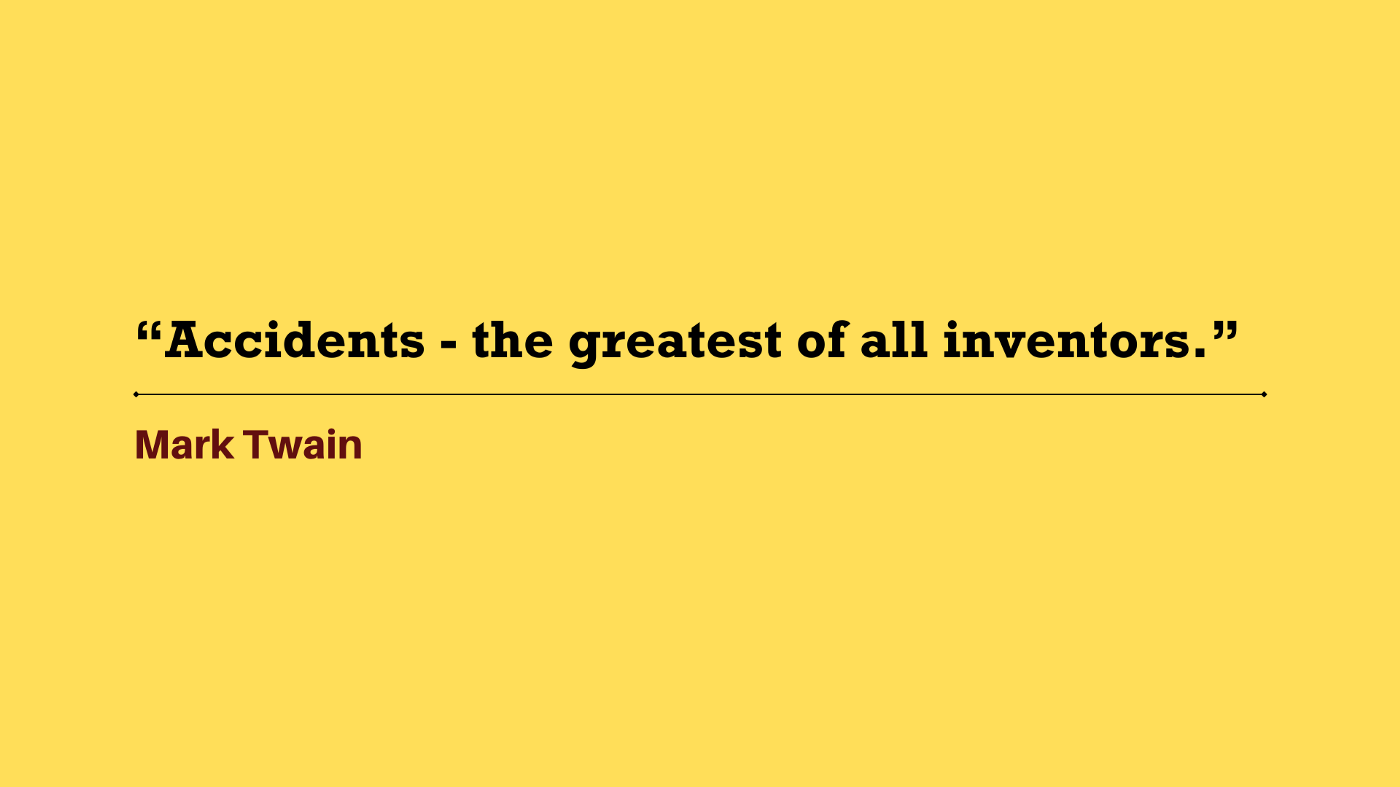 Accident is the name of the greatest of all inventors, to paraphrase Mark Twain. From microwaves to chocolate chip cookies, from the pacemaker to the potato chip, so many different objects that have become part of our everyday lives owe their existence to serendipity.

Take, for example, the case of the Post-It. Dr. Spencer Silver, an employee of 3M was trying to create a stronger or tougher adhesive when he discovered a compound that would lightly stick to objects and would allow attached surfaces to peel apart easily. Silver suggested that this adhesive be used to create sticky surfaces for bulletin boards in order to eliminate the use of pins or tacks. His company didn’t really see the point of this product until a few years later when Art Fry, another 3M employee, was frustrated because the pieces of paper that he used to keep track of which hymns his church choir would sing each week kept falling out of his hymnal. He needed a bookmark that would stick to the pages and be easily removable and remembered Silver’s adhesive. He went to Silver with the idea to instead put the adhesive compound on paper rather than bulletin boards. With this, they began developing what is now known as the Post-It.

To convince 3M of this product’s value, Fry and Silver provided the entire company with samples of their sticky notes, and it proved to be very popular among the other 3M employees. As a result, 3M then launched adhesive notes under the name “Press ’n Peel”, the precursor to the modern-day Post-it.

Since it wasn’t the stronger adhesive that Silver was trying to create in the first place, it would’ve been very convenient for these scientists to just discard the compound in its entirety. We could have, very easily, lived in a world without the Post-It, a product that has helped generations of individuals with their organizational and time management skills. Instead, for the year 2020, 3M generated $5.3B purely through the sale of their consumer business, driven primarily through Post-Its!

It comes to show that when you innovate, it is just as important to examine carefully the things that you have ended up with, even when they are not as intended, and think about where they may be useful. Not all products are intentionally developed, and innovation involves remembering this fact. Another point brought up by the Post-It story is that sometimes, a product may not be obviously or intuitively recognizable as necessary/useful to customers. Even the company selling Post-Its had to be convinced of its usefulness. Further, innovations do not always have to solve complex problems, rather, even the creation of small things that bring one joy, ease convenience, or lessen their burden count!

As Albert Szent-Györgyi said, “a discovery is just an accident meeting a prepared mind”, and it is the prepared mind that recognizes and identifies the discoveries that change the world in small ways or large.